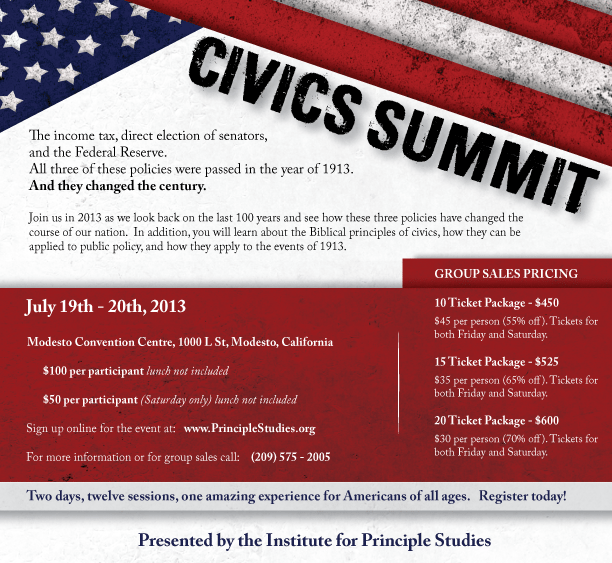 1913: The Year that Changed the Century

The income tax, direct election of senators, and the Federal Reserve. All three of these policies were passed in the year of 1913. And they changed the century.

This is government and economics as you’ve never heard it before. This conference looks back on the last 100 years and how these three policies have changed the course of the nation – and history.

Learn about the fundamental Christian principles to civics, how they can be applied to public policy, how Christians should view government and economics, and finally, the three 1913 policies and some Biblical solutions.

Dr. Ritenour received his Ph.D. in Economics from Auburn University. Before coming to Grove City College, Ritenour held the Ruby Letsch-Roderique Chair of Economics at Southwest Baptist University. Shawn is most recently the author of Foundations of Economics: A Christian View.

Joel Herche is an Associate Professor of Marketing at the Pacific’s Eberhardt School of Business. After earning his undergraduate degree in economics in 1979, Dr. Herche worked as a market analyst for Intel Corp. and later joined the staff of Hewlett Packard. Joel earned his Ph.D. from the University of Oregon in 1989.

Listen to the full conference sessions!  The audio is in order as it was presented at the conference.  Please note that the audio is raw and unedited. There are 10 teaching lectures in all. Feel free to listen, download and share. Enjoy!

Civics Summit is a two day conference focusing on one government or economic topic, addressing it in both theory and in practical application. Featuring guest speakers from the around country, Civics Summit dissects policies and offers biblically-based, liberty-driven solutions.