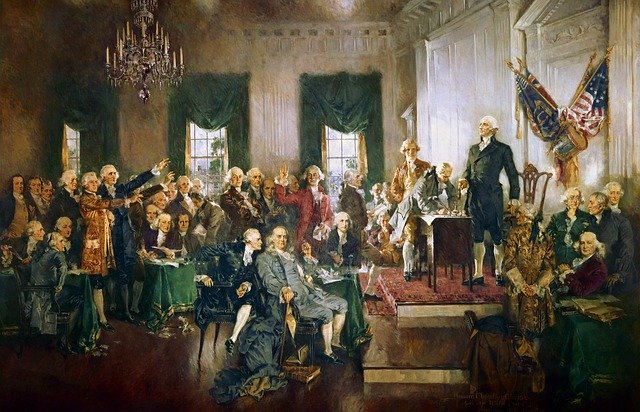 An IPS Commentary
By Mike Winther, President of the Institute for Principle Studies

What Happened to Separation of Powers?

Much of the news over the past six weeks has focused on the efforts of our governors and our President to contain the impact and the spread of the novel coronavirus.  There is considerable debate about whether the anti-virus measures are too restrictive, too lenient, too early, or too late. There is very little discussion, however, about whether it is appropriate for these executive branch officials to bypass their legislatures to make law. This necessitates a long overdue discussion of law-making and Separation of Powers.

The restrictions that we face (restrictions on our movements, our assembly, our freedom of worship and our ability to work) have come from the executive branches of our governments and not from our legislative bodies.

One of the basic principles of our American system of government is that our nation’s laws are made only by the legislative branch of government. The U.S. Constitution states in Article I, section I, that, “All legislative Powers herein granted shall be vested in a Congress of the United States, which shall consist of a Senate and House of Representatives.” Note the use of the word “all”.

Separation of Power vs Tyranny

Tyranny is defined as the unjust and unrestrained use and abuse of government power.  One of the key traits of tyranny is the consolidation of legislative, executive, and judicial power in one place.  The king and the dictator assume each of these powers without any checks and balances.  Our nation’s founders understood that separating these three roles was essential to the preservation of liberty.

Separation of Powers Under Attack

In the past century, those who wish to subvert the basic principles of American government have creatively manipulated the language to subvert the Separation of Powers principle. We now have “rules”, “policies”, “directives”, “executive orders”, “regulations”, “signing statements” and, worst of all, “administrative law”.  We can employ an entire thesaurus of terms, but ultimately anything that regulates the citizens is a law and must be properly enacted—by a vote of Congress and then by the signature of the President or the congressional override of his veto.

Regardless of what they are called, each of these “rules” are used to regulate people’s rights or behaviors. They are no different than “laws” except that they did not originate in the Legislative Branch of government.  The use of all of these synonyms is intended to confuse both citizen and lawmaker in an effort to undermine the Constitution and its checks and balances.

At both the state and federal level, legislators are often participating in the surrender of their powers.  Both the U.S. Congress and state legislatures regularly pass legislation in which they delegate their law-making power to others.  At the federal level, Congress has delegated law-making to hundreds of administrative agencies and departments.  The EPA, OSHA and the IRS are but a few examples of agencies within the executive branch of government that now make law.

The Constitution does not allow any branch of government to delegate its authority.  It is important to remember that all legitimate federal government powers are, and must be, enumerated (listed) in the Constitution. We cannot assume a power of delegation unless it is specified in the Constitution—and I assure you that no such delegation can be found in the document.  If we properly understand the Separation of Powers into three branches (the legislative, the executive and the judicial), we would then understand how objectionable it would be to our founders to have one branch delegate its powers to one of the other branches. What if the Congress and the Supreme Court were to delegate all of their authorities and powers to the President? It should be obvious that no founding father would allow that this could be constitutional.  This is anathema to both the letter of our Constitution and the principles that undergird it.

Yet, Congress has delegated its law- making authority to hundreds of agencies within the administrative branch of government.  These agencies produce tens of thousands of pages of regulations each year and there is no vote of Congress to approve them.

This is a problem at every level of government.  Each of America’s 50 states is constitutionally bound to have a republican form of government and they all have legislatures that exist to make law. Unfortunately, our state legislatures are guilty of the same practice of delegation.  In many cases, legislatures have passed laws granting extraordinary numbers of “emergency powers” to their chief executives.  These supposed “emergency powers” are a gross violation of the concept of Separation of Powers.

In this era of the COVID-19 virus, we observe the President and our 50 governors making “rules” about travel, gatherings, and business closings. (For the purpose of this article, let’s ignore the important question about whether these actions are a proper use of government force—I have written and spoken elsewhere on these questions.)  If we were to assume, for a moment, that these rules are a proper use of government, it should still be necessary that these policies be properly enacted by the appropriate legislature.  Without this, there is no Separation of Powers.

The founders of America rebelled against monarchy and established both a constitution and a legislature.  These two institutions have been under attack ever since.

Americans need to speak out against all laws that are not enacted by Constitutional procedure.  We need to remember that policies, rules or regulations are just creative names for what should be called “laws”.  If we allow the Constitution to be violated without complaint, and if we turn our back on the essential principle of Separation of Powers, we will deserve the monarchy that will enslave us.