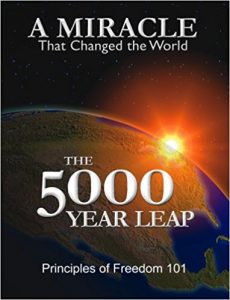 The 5,000 Year Leap: A Miracle that Changed the World

Why does our government work? Were the founding fathers the one group of people that got everything right or is the United States just a magnificent fluke? In The 5,000 Year Leap, author, W. Cleon Skousen, argues that there was a model used by the founders that can be replicated and practiced to bring about world changing results.

The 5,000 Year Leap is an engaging, very readable 310 pages that details the foundational principles that, although less prevalent today, have been the key to the success of the great American experiment.

Why Was America So Different?

We begin with this question. Over the course of human history, there have been many attempts to craft a civilization that would protect the well-being of its citizens. Skousen shows that throughout history there have been many groups of people that have fallen into the exact same pitfalls over and over again. Yet, a group of weather beaten colonists established something very different from what we have seen in the past. The question is: how?

Structuring a government with all the power in the people

The 5,000 Year Leap is divided into two main parts. The first section begins with a beautiful explanation of the rather nebulous political terms of “right” and “left.”  Skousen masterfully lays out the history of where these terms originate and demonstrates just how confused and meaningless these terms have become.

He then demonstrates the history of several very foundational principles that guided the founding fathers in crafting the American system. He does this through a beautiful blend of historical examples from the founder’s era and by showing the biblical model that the founders emulated.

These principles, such as: the rule of law, separation of powers and the importance of small limited government, are clear to see in the writings and testimonies of the founders.

All of this is accomplished in less than 30 pages! Like the rest of his work, this section holds so many areas of insight while maintaining a very easy to read length.

28 great ideas that changed the world

This section makes up the bulk of Skousen’s work. Here he outlines 28 principles, or in his words, “28 great ideas that changed the world.” While I could spend several pages attempting to explain the importance of each of these points, I would much rather have you take the time to read these principles for yourselves. Each point is roughly 15 pages, and taken one at a time, they are a very easy read.

There are two overarching themes that relate to these principles.  First, man and his institutions are flawed.  All have sinned and therefore no one person or group of people can be trusted with absolute power.  Second, mankind needs some form of rules.  Skousen is his book argues that the cornerstone of our country’s founding principles are that all men are under “the law” and that this law has to come from a source higher than man.  This argument begins in principle 1, The Genius of Natural Law, but this theme carries throughout the book.

I would highly encourage our readers to make a commitment to reading one of these principles either each day, every other day or even just once a week. Although this book is easy to finish, it is well worth a second or even third read just to ponder these principles.  Lastly, I have focused quite heavily on the principles outlined in this work, but for those of you that might be a little more analytical, there is a lot of practical examples of how these ideas work.  I particularly enjoyed principle 12, Advantages of a Republic, and principle 15, Free-market Economics.

Things to keep in mind

The one potential flaw that I have found with Skousen’s work is that he places a very high emphasis on the importance of education. This in and of its self is not a major concern, but Skousen also does not take steps in his work to recognize the danger of public, government-sponsored education.

We will readily grant that a well-educated electorate (principle 23) is important to the maintenance of a free society, but the means by which we educate are also vital to demonstrating proper principles to younger generations.  For example, how can a system in which some receive education at the expense of other individual’s labor or time ever hope to take a principled stance against harmful ideas like socialism.

Lastly, the foundations or good ideas that are discussed in this work are not a creation of any man, but rather a gift from our Creator. The founding fathers were truly great men and the documents that they crafted were great works, but in the end, all men are imperfect and the only perfect model for government is found in God’s word.

The 5,000 Year Leap is a great book and a wonderful example of why principled-thinking can and has radically changed the world that we live in. Overall, this book deserves an A rating. As mentioned above, the only concern that I have with this work is the absence of criticism of the public school system. This concern can be addressed by partnering this book with other works that fill in this omission.    We recommend Is Public Education Necessary? by Samuel L. Blumenfeld and Indoctrination: Public Schools and the Decline of Christianity in America by Colin Gunn as two great places to start.