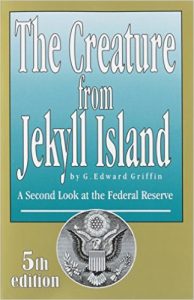 From the Back Cover of The Creature from Jekyll Island:

“Where does money come from?  Where does it go?  Who makes it?  The money magicians’ secrets are unveiled.  Here is a close look at their mirrors and smoke machines, the pulleys, cogs, and wheels that create the grand illusion called money.

A boring subject?  Just wait!  You’ll be hooked in 5 minutes.  Reads like a detective story – which it really is.  But it’s all true.  This book is about the most blatant scam of history.  It’s all here: the cause of wars, boom-bust cycles, inflation, depression, prosperity.  Your world view definitely will change.  This may be the most important book on world affairs you will ever read.”

IPS Book Review of The Creature from Jekyll Island:

Get ready for a jaw-dropping expedition through time!  If you’re not an avid reader, don’t fret. The Creature from Jekyll Island will leave you on the edge of your seat and have you itching to read the next page. This book will consume your thoughts and have you thinking long after the page is turned. It will help you understand the Federal Reserve System—but more importantly, it will change your outlook of money forever.

Although this book is formidable in size (a whopping 608 pages), it is an enthralling read.  Griffin’s writing is plain and compelling, rather than a dry narrative overwhelmed with jargon.  The book almost reads like a mystery novel.  As Griffin expresses:

“This is a story about limitless money and hidden global power.  The good news is that it is as fascinating as any work of fiction could be, and this, I trust, will add both pleasure and excitement to the learning process.  The bad news is that every detail of what follows is true.”

Some people label Griffin as a conspiracy theorist because the story seems too preposterous to be true, but every claim is substantiated by fact and research.  Griffin simply lays out the evidence trail of one of the most well-concealed and outlandish crimes of all time.  So put on your detective hat, get out your eyeglass, light your old-school pipe, and begin the investigation of the past century.

What is the Federal Reserve System?

Is it federal?  Are there reserves?   Is it a bank?  Or is it something else altogether?  Answering these questions is the first stop on our journey, but it’s actually not at the beginning of the story—it’s in the middle.  To solve this riddle, we must travel back to the early 1900’s.

At this time period, most financial resources in the world were held in the hands of a few elite banking consortiums, represented by the names of Morgan, Rockefeller, Rothschild, Warburg, and Kuhn-Loeb.  These were all competitors in the banking industry—Morgan and Rockefeller from America, and the rest from Europe.  But in November of 1910, six representatives from these powerful banking groups (who represented an estimated one fourth of the wealth of the entire world) met in great secrecy on a private island off the coast of Georgia called Jekyll Island.  Why?

Starting in the late 1800’s and especially in the early 1900’s, there was a growing trend of new banks springing up across America.  Combined with less borrowing and internal business investing, the market share and power of the elite banking groups began to decline.  It was at this point that they realized that “the enemy of my enemy is my friend.”  For each of the elite banking consortiums saw competition and the free market as their worst enemy.  To “fix” this problem, they met stealthily to devise a plan on securing and monopolizing their positions.  Griffin writes:

“The reason for secrecy was simple.  Had it been known that rival factions of the baking community had joined together, the public would have been alerted to the possibility that the bankers were plotting an agreement in restraint of trade—which, of course, is exactly what they were doing.”

Thus, the mission became one of forming a cartel agreement, using the force and involvement of government, to gain control over the money supply.  Their challenge: how to convince Congress that the scheme was a measure to protect the public.  The result: careful wording and hidden agendas forming the “Federal Reserve System.”

This, however, is just the “Creature’s” origin.  To learn the ploys, structure, gimmicks and true purposes of the Federal Reserve System, you must read section one of the book for yourself.

We all know what money is, right?  Or do we?  Is there such a thing as good or bad money?  Does funny money exist?  Let’s find out.

Previously in America, our nation had receipt money, which was backed by gold and silver— that generally met the standards of sound money.  However, the Federal Reserve System has replaced our nation’s receipt money with fiat money—“paper money decreed legal tender, not backed by gold or silver”—that fails two of the standards constituting sound money.  This means we own and are using funny money, since paper is neither scarce nor intrinsically valuable.  It’s as plentiful as the sand on the seashore and is comparable to Monopoly money.  The only difference is that we’re forced by government to accept it!

This was a key strategy of the Federal Reserve System in order to make money more “elastic” (a.k.a. limitless).  This endless, fiat money is created out of thin air in a mystical act that Griffin aptly names the “Mandrake Mechanism.” But you’ll have to read on to find out more.  It’s revealed in great detail in sections two and three.

Not the First Time

Did you know that America had already fatefully experimented with centralized banking not only once, but three times?  The years of creation were 1781, 1791, and 1816.

These politically-granted-monopoly banks functioned the same way the Federal Reserve does.  They purchased government debt with fiat money using the “Mandrake Mechanism,” and then used the government debt as “reserves” to create additional fiat money for public lending.  The results of which were the same.

What ends up happening (which you’ll need to read The Creature from Jekyll Island to fully understand) is that the American public is fleeced of 30%, 40%, 50%, and even 60% of their money—on top of their taxes!

Section four walks you through this tragic history and demonstrates how boom-bust cycles came to be.

To find out why, dive into section five.

In the final section of the book, Griffin theorizes futuristic scenarios using present trends.  Most of what you’ll find here is unpleasant, but we must understand that these events have not yet come to pass.  However, we should not be naïve in thinking that there will be no consequences to pay.  There will be.  I do like how Griffin concludes the summary for this section: “If we do not like what we see, we still have an opportunity to change those forces.  The future will be what we choose to make it.”

Why the Fed should be Abolished

To summarize, Griffin’s seven reasons to abolish the Fed are:

The Creature from Jekyll Island provides the reasoning and evidence substantiating these claims.

Abolishing the Fed is just the beginning.  The real problem is ideologies and philosophies like collectivism, which asserts that the group is more important than the individual and that government is justified in any act so long as it is claimed to be the greater good for the greater number of people.  This is the rot that must be done away with, and it already exists in many forms.  To be victorious, Americans must come across this knowledge and then act on it.  A stratagem to accomplish this crusade is laid out at the end of the book.

The Creature from Jekyll Island is an absolute must read in order to fully understand what’s happening in our political system and economy.  Pick up your copy today from the IPS bookstore and learn how the “Creature” operates—and how it can be slain.