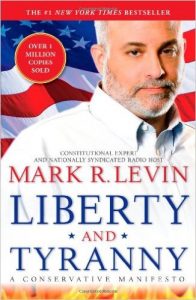 Liberty and Tyranny is a recent bestselling book by radio talk show host Mark Levin. It is an easy, interesting, and entertaining read. As I read Liberty and Tyranny, I couldn’t help but notice that this book was a great case study on the battle over labels and identities in our current political landscape. Most of my readers are well aware that there is a battle over labels in America today. What do we call ourselves? What do we call our opponents? What do our opponents call us? Are we republicans, democrats, conservatives, liberals, libertarians, or progressives? Much of our political discourse in society revolves around labels and identity. This is true in twenty-first century America, but it has also been true in almost every epic of time.

Considerable credit is due to Mr. Levin for his thoughtful attention to an appropriate label for his philosophical adversaries. Throughout the book he uses the term “statist” to refer to those who promote ever-bigger government as the solution to our nation’s problems. The term statist (pronounced state-ist) refers to those people and philosophies that desire a large role for the state (civil government) in society. This term is more accurate than terms like “liberal” or “leftist”, which have shifting meanings over time. (In many historical periods, for example, the “liberals” were those who, in support of liberty, favored smaller government. Many of America’s founders were self-described liberals. In our present age, many liberty-minded individuals are adopting the term “classical liberal” as a way of separating themselves from those statists who call themselves “conservative”.)

Unfortunately, Levin ultimately fails to avoid meaningless, relativist labels on the other side of the philosophical spectrum by identifying himself and other anti-statists as “conservatives”. I must confess that I, too, am partial to the term and have used it to describe myself. The term “conservative”, however, like the term “liberal”, tends to be a relative standard. During the War for Independence in 1776, a conservative would have been one who supported the crown and heavy-handed government. Many, if not most, of those who identify themselves as conservatives today are actually statists. Conservative statists, of course, only support expanding government when advocated by Republicans. If a conservative is someone who wants to conserve (preserve) the status quo, then today’s conservative would also be a statist.

In his chapter on the Constitution, Levin makes a good case for a strict constructionist interpretation of the document. He does an excellent job of defending the importance of original intent when interpreting or adjudicating the Constitution. Here, Levin clearly addresses the debate between the strict constructionists and those who want the Constitution to be a “living, breathing, evolving” document. On this subject, he provides some outstanding historical and logical analysis. In other areas, Liberty and Tyranny also contains first-rate chapters on federalism, environmentalism, and welfare.

The point that requires the reader’s discernment kicks in when Levin gets to chapter 10, which is entitled “On Self-Preservation”. This is his defense of many, if not most, of our nation’s “conservative” policies relating to terrorism and international affairs. In this chapter, Levin takes issue with George Washington’s Farewell Address and its warnings against foreign alliances and entanglements. In the process of defending a substantial portion of current U.S. foreign policy, Levin argues that George Washington’s intentions are largely misunderstood and that Washington would in fact be accepting of many of our current international entanglements. I would certainly dispute Levin’s analysis of Washington, and instead use a strict constructionist approach to understanding our first president’s Farewell Address.

Additionally, despite Levin’s excellent defense of the Constitution, he fails to defend Article I, Section 8 of the Constitution, which gives Congress the exclusive power to declare war. Congress has not declared war since World War II, and unfortunately, Americans have grown largely accustomed to the idea of sending our troops all over the world without a formal declaration of war. Some would argue that Congress has essentially approved these wars, since they have voted for the necessary funding. This is a dangerous standard, however, the error of which becomes more obvious if we apply this standard to other aspects of the Constitution.

Are we willing to apply this standard consistently? Is it legitimate for the President to assume any duty of Congress as long as Congress does not object or as long as Congress agrees to fund that assumption of power? For example, the Congress, not the President, is given the power of impeachment. If a President were to impeach a federal office holder, would we accept this usurpation of power? What if the President’s impeachment proceedings required funding and the Congress were to pass an appropriations bill for the trial expense? In this example, Congress would certainly be derelict in their duties, but the usurpation of power by the executive branch would still be unconstitutional—just as our recent wars are still unconstitutional. Levin fails to support the Constitution on this point.

Scattered throughout the work are occasional references that assume that America is and ought to be a democracy, but this is far from the truth. The idea that proper government actions ought to be determined by the will of a majority of the citizens struck fear in the hearts of our nation’s founders. In conclusion, then, Liberty and Tyranny will certainly provide some astute arguments and insight for the reader who wants more ammunition for his discussions with statist friends. Readers should not, however, expect Mr. Levin’s book to always take a principle-based approach to the issues he discusses. And like many who now claim the label of “conservative”, Levin misses the mark on some foreign policy matters.