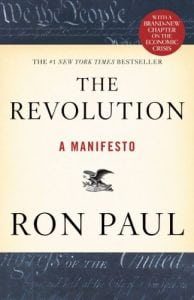 The Revolution: A Manifesto

Dr. Ron Paul, Texas congressman and candidate for the Republican nomination in the 2008 presidential race, has been hailed by Judge Andrew Napolitano as “the Thomas Jefferson of our day.” Nicknamed “Dr. No” in Congress due to his willingness to stand alone in opposing legislation that he believes is illegitimate, Ron Paul has demonstrated that he is one of the few politicians left who acts on principle, not on political expediency. His recent book, The Revolution, is proof of his straight-talk belief in sound policies in every aspect of government. Full of common sense and frighteningly honest, The Revolution clearly outlines the message of freedom that has drawn support from tens of thousands across America—and it also explains why the political establishment and the American media are terrified to give Ron Paul a voice. He reveals clearly—too clearly for the media’s comfort—exactly what has gone wrong in our country.

The Revolution should be required reading for every American who cares about our nation and its future. Barry Goldwater Jr. says that it is “the real truth about Liberty” and “takes a wrecking ball to the political establishment.” Throughout the book, Dr. Paul argues that the fundamental questions Americans need to be asking about government and society have become taboo; they are so far off the table that it’s almost impossible to bring them up in political discussion in modern society. Despite politicians’ endless promises of “change” each election cycle, we should know better by now. True change will require much more than what many of our current leaders are willing to give. As Dr. Paul puts it in the preface, “Real change would mean something like the opposite of [what politicians end up giving us]. It might even involve following our Constitution. And that’s the one option Americans are never permitted to hear.”

Getting to the Heart of the Matter

Instead of asking serious questions in the political arena, Dr. Paul argues, our mainstream media “focuses our attention on trivialities and phony debates as we march toward oblivion.” The Revolution brings these serious questions to the forefront of discussion once again. Dr. Paul analyzes our modern world in light of the Constitution and the principles that shaped it, and he recognizes the radical importance of such principles: “These ideas cannot be allowed to die, buried beneath the mind-numbing chorus of empty slogans and inanities that constitute official political discourse in America.”

Through the book’s six main chapters, Dr. Paul asks—and more importantly, answers!—fundamental questions about society and government. These chapters cover “the false choices of American politics, the foreign policy of the founding fathers, the constitution, economic freedom, civil liberties and personal freedom, and money: the forbidden issue in American politics.”

Though not incredibly detailed (readers looking for exhaustive studies of the topics covered should look elsewhere), Dr. Paul’s survey and overview is concise, clear, and extremely insightful. It is, at times, encouraging, depressing, and sometimes downright shocking in its honesty. It is a fascinating read, even for someone who has but little interest in politics. Called “the Common Sense of the second American revolution,” it is, in short, a must-read for anyone who cares about liberty and the future of America. Let the revolution begin!