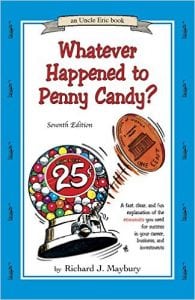 Whatever Happened to Penny Candy?

I am thoroughly convinced that every American—and certainly every American leader—should read Whatever Happened to Penny Candy? by Richard Maybury, part of his series of “Uncle Eric” books.

Penny Candy is formatted as a series of letters from economist “Uncle Eric” to his nephew Chris, and the result is a fast-paced, highly engaging book that covers the fundamentals of economic theory.  Maybury’s goal in the Uncle Eric book series is to present material on a variety of topics in a way that is understandable and enjoyable to the lay person, without an excess of technical jargon that obscures the clarity of a topic.

The Refreshing Simplicity of Penny Candy

Penny Candy presents economic theory in simple, entertaining ways that simply make sense to the reader, even the reader who has no prior experience with economic concepts.  In the words of Maybury, economics is “fascinating and easy to understand, except when someone presents it in a boring or difficult way.”  Penny Candy thoroughly capitalizes on this perspective, and Maybury explains that in writing the book, he drew on students, business managers, and investors, and he states that “no concept was included until it was declared to be clear and easy to understand.”

So far from being overly complex and difficult, Penny Candy resides on the opposite end of the spectrum, almost overly simplified at times. Some of Maybury’s analysis is indeed perhaps a bit too simplified; for the sake of making his point easy to understand, he sometimes makes an illustration almost too simple. Nevertheless, he does succeed in making his discussions of various economic concepts very readable and entertaining. Never let it be said that economics is boring—Maybury puts that rumor to rest for good!

One particularly unique aspect of Penny Candy is the fact that Maybury focuses heavily on the history that is relevant to the economic concepts he presents.  For example, in his discussion of inflation, Maybury relates how the history of inflation goes all the way back to the Roman Empire.  Once the Roman government realized they had raised taxes as high as the people would stand without revolt, they inflated the money supply by clipping or shaving the edges of coins and using the shavings to make new coins.

Another example is in Maybury’s discussion of the evils of wage/price and other government-imposed controls, where he uses the historical example of Germany just after World War II.  Due to the efforts of economist Ludwig Erhard, Germany rose from a modern Dark Age that had occurred as a result of the war to become one of the world’s most prosperous nations. This was a dramatic change that took place in a mere 25 years, but only after the wage/price controls imposed by the Nazis were lifted, taxes were lowered, and inflation was stopped.

The importance of the historical perspective cannot be understated in a study such as Penny Candy presents.  It is impossible to grasp the full impact of concepts like inflation or wage/price controls without understanding the historical significance of what happens when we see these concepts in action within a society.  We cannot fully understand the horrors of runaway inflation, for example, without examining the havoc it has wreaked on African nations like Zimbabwe.  In short, an examination of the historical context of these concepts makes application of economic theory much more practical and understandable in our daily lives—and Penny Candy does a terrific job of presenting the historical perspective.

On the whole, Penny Candy is a fabulous introduction to some of the most important economic concepts, concepts which are exceedingly relevant and critically important to our economically disastrous society in modern America.  If only we could present this economic introduction to every member of our country’s government!