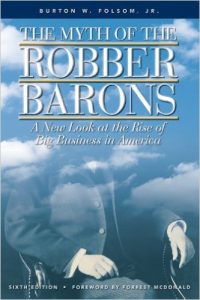 Looking for entertainment in a history book?  You’ve found it!  Watch the political charades unfold as entrepreneurs face off against one another in the industries of steamboats, railroads, iron, steel, and oil.  However, not all entrepreneurs were the same… and this is where the myth of the robber barons is exposed.

In The Myth of the Robber Barons: A New Look at the Rise of Big Business in America by Burton W. Folsom, Jr., Folsom differentiates entrepreneurs into two categories during the 19th and early 20th centuries:  political entrepreneurs (who lobby government for subsidies and monopoly rights) and market entrepreneurs (who innovate and reduce costs to provide the best good or service at the lowest price).

What is a Robber Baron?

Before we continue, it’s important to distinguish what is meant by the term robber baron.  Robber Baron is a derogatory term describing a very wealthy person who amassed their fortune by presumably cheating or stealing from others.  Originating in the 19th century, it was used to denounce many of the businessman listed in Folsom’s book because of the riches they amassed through free market capitalism.  Instead of thanking the entrepreneurs for making highly valuable goods and services available to the common man through innovation and competition, they were condemned for their profits.

“In the steamship industry, political entrepreneurship often led to price-fixing, technological stagnation, and the bribing of competitors and politicians.  The market entrepreneurs were the innovators and rate-cutters.”

Next, Folsom looks at the construction of the transcontinental railroads.  After California was incorporated into the U.S., dreams of a transcontinental railroad flourished, which led Congress to hastily pass the Pacific Railroad Act.  This created both the Union Pacific and the Central Pacific railroad companies. James J. Hill is the market entrepreneur featured who built the Great Northern Railroad without a penny of government aid in contrast to the Union Pacific, Central Pacific, Northern Pacific, and Santa Fe Railroads that existed solely because of government aid.  In all the government chartered and subsidized railroads, inefficiency, shoddy production, waste, corruption, scandals, murder, theft, bankruptcy and more ensued.

In addition, a number of laws were passed as a result of these effects creating the Sherman Anti-Trust Act, the Interstate Commerce Commission, and the Hepburn Act — all of which ended up hurting free market competition and added to the growth of government.

The remaining chapters look at the Scrantons and America’s first iron rails, Charles Schwab and the steel industry, John D. Rockefeller and the oil industry, and finally, Andrew Mellon cutting taxes to raise revenue during the 1920’s.  Folsom concludes the book with a chapter on the battle over history and revisionist nuances that pervade high school and college textbooks.

The only caveat to the book is that John D. Rockefeller is given a glowing review when the family and the Rockefeller Foundation have a history of being a large proponent of big government.

A fitting way to end this review is by quoting Forrest McDonald in the foreword to the book:

Burton W. Folsom, Jr. is the Charles Kline professor of history and management at Hillsdale College in Michigan. He received his Ph. D. from the University of Pittsburgh, and has taught U. S. history at the University of Nebraska, the University of Pittsburgh, Murray State University, and Northwood University. He has also been a senior fellow at the Mackinac Center for Public Policy in Midland, Michigan; and historian in residence at the Center for the American Idea in Houston, Texas. He has written articles for the Wall Street Journal, the American Spectator, Policy Review, and Human Events. Professor Folsom’s first book was Urban Capitalists. His later books include Empire Builders, No More Free Markets or Free Beer: The Progressive Era in Nebraska. He has two edited books, The Spirit of Freedom and The Industrial Revolution and Free Trade. His articles have appeared in the Journal of Southern History, Pacific Historical Review, Journal of American Studies, Great Plains Quarterly, The American Spectator, and The Wall Street Journal. He is a columnist on economic history for The Freeman for Ideas on Liberty.